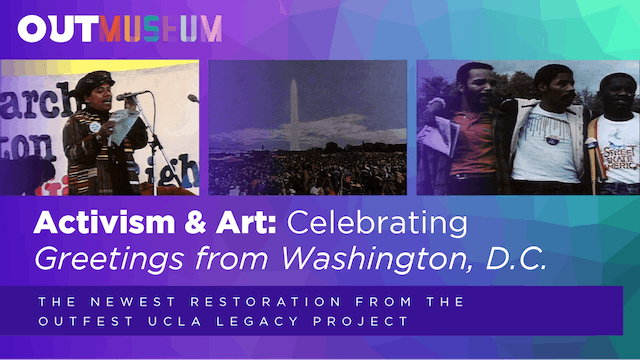 In celebration of the Outfest UCLA Legacy Project's most recent film restoration, The OutMuseum is thrilled to share the landmark documentary Greetings from Washington, D.C. (1981) alongside a new roundtable conversation with the filmmaking team Lucy Winer, Frances Reid, Greta Schiller, and Terry Lawler. This joyfully observational documentary, in the spirit of art as activism, recorded a day that brought together marchers from all corners of the LGBTQ+ community to give voice to our collective persistence and pride; in Reid’s words, “we were being intersectional before it was called intersectionality”

From a boots-on-the-ground perspective, this scrappy group of young filmmakers – which included producer Rob Epstein (Common Threads), and key assistance from Barbara Hammer (Nitrate Kisses), Peter Adair (Word is Out) and Jan Oxenberg (Comedy in Six Unnatural Acts) – engaged their curiosity and their cameras to capture history in the making as tens of thousands of LGBTQ+ individuals converged on the National Mall to participate in the first National March on Washington for Lesbian and Gay Rights in 1979.

What they created is not just an evocative time capsule of that pivotal moment, but an evergreen ode to the power of collective solidarity and a vigilant reminder for our community to stay engaged and visible in the face of injustice. In that spirit, we've also curated a selection of documentary (and one narrative) short films centering LGBTQ+ activists and activism alongside this gorgeous new restoration and illuminating conservation.